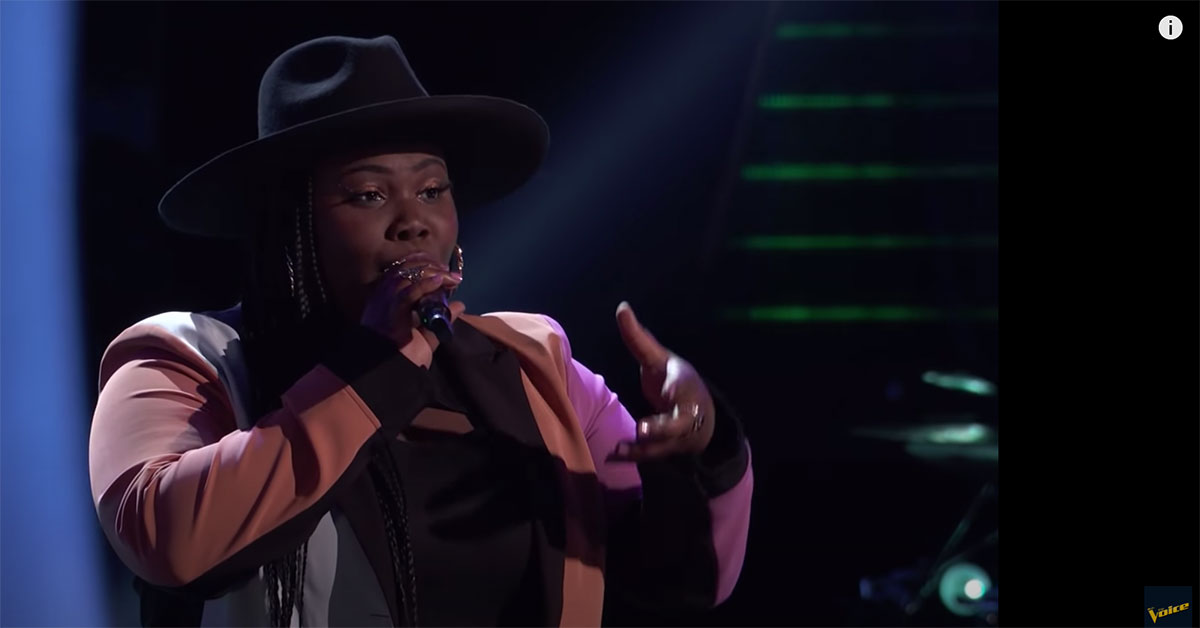 On the Monday, October 4, 2021, broadcast, contestant Jershika Maple wears a black hat for her Voice audition. The hat has a nice, wide brim and a well-done pinch in the crown. Nicely worn, I must say!

During her performance, the judges are clearly moved, but only John Legend and Kelly Clarkson turned their chairs in this blind audition.

Jershika, a 24-year-old singer who works as a security guard, is from Killeen, Texas. She packs a strong punch with exceptional vocals while singing the song, “Can You Stand the Rain.” Ariana Grande mentions the “incredible gift” that Jershika possesses.

John, who was clearly enthused by her singing, said it was a “powerful, electric, exciting performance” and lobbied hard for her to join his team.

Kelly praised Jershika’s spirit, saying that she was “a light, and that smile of yours is so great. It’s so great!” and that she will be “such a great addition to the show.”

All the while, Jershika is sporting her cool black hat and laying on the charm with a great, natureal big smile. Looking good!

Both John and Kelly pulled out their respective team jacket and robe, duking it out to win Jershika’s vote. John even reverted to his song from last season, “Welcome to Team Legend” pulling out all the stops. But, Kelly also voiced her own “Welcome to Team Kelly” version, and Jershika clearly loved this “back and forth” from both of these music superstars.

When Jershika picked Kelly, she was super excited to add her to Team Kelly, while John was definitely disappointed. He was a still good sport, though, as usual.

To view the performance and the ensuing “battle” between John and Kelly, watch the video below. Make sure you check out the hat that Jershika is wearing, too … can’t get enough of seeing these women in hats, in the grand world of entertainment, but also in everyday life on the streets.Have a very merry day! Take time to sing a song today and, as always, add some style to your life and wear a hat.

Have a very merry day! Take time to sing a song today and, as always, add some style to your life and wear a hat.

Put on Your Thinking Cap:

Leave Your Comment(s) Below…

(paid link)
"As an Amazon Associate I earn from qualifying purchases."